Swimming superstar Sharron Davies, MBE was kind enough to perform the official opening of Our Pool on 19 February 2014.  Sharron won the silver medal in the 400 metres individual medley at the 1980 Moscow Olympics and two gold medals at the 1978 Edmonton Commonwealth Games.  As well as being a fantastic swimmer we can report that Sharron’s pretty nifty with a pair of scissors too!

Guests at the official opening included representatives of all of the companies that helped to make the construction project such a success as well as Vic and Helen from the Little Swim Company and Sarah and Sam from Puddle Ducks who are already running very successful swimming classes at Our Pool.

Follow these links to read what the papers said:

The video above of Sharron Davies at the Our Pool opening was shot by Chris Morley of Morley Films.

The photos above were taken by talented local photographer Louis Smith.

Our Pool Sponsors The Panama Paddle 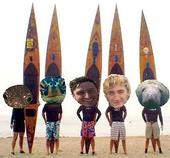 We’re delighted to announce that the Panama Paddle team used Our Pool for swim training for their project.

The project involved paddling prone, using arms alone, for 374 miles along some of the wildest coastline in Central America to raise awareness of conservation issues in Panama.  This is the longest journey ever completed on these boards.

You may recognise at least one of the team – Arron Ford is Martin’s nephew and he works on the farm.

Who'd have thought it.. 2 boys from Bristol have now paddled further than any person in the history of man. WORLD RECORD BROKEN! ‪#‎underdogs‬